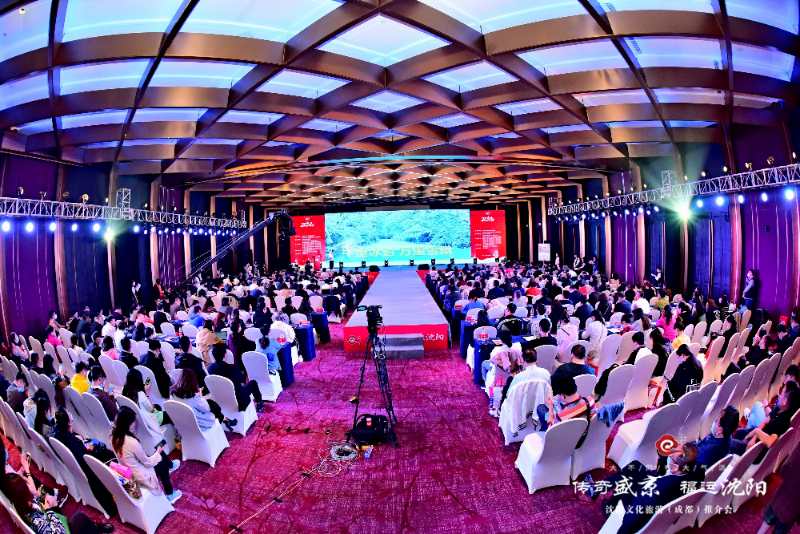 At the promotion meeting, the colorful cheongsam show made the audience unable to put down their mobile phones.

Xu Nannan introduces the ice and snow tourism in Shenyang.

The cultural performance of Qing Dynasty attracted the audience's attention.

On October 13, a grand event full of classical charm and fashion charm was solemnly staged in the "land of abundance", which was hosted by the Propaganda Department of Shenyang municipal Party committee and Shenyang Municipal Bureau of culture, tourism, radio and television The promotion meeting of "Fuyun Shenyang" cultural tourism (Chengdu) was held. More than 200 participants, including key travel agents and media representatives from Shenyang and Chengdu, attended the promotion. The tourists in Chengdu were deeply attracted by the charm of Shenyang's cultural tourism. After the promotion meeting, they were immersed in it and discussed the mode of deep cooperation with Shenyang tourism industry.

Magnificent royal model show, passionate and romantic ice snow song and dance, robot performance with technology and sense of future There were many highlights in the promotion meeting. The charm of Shenyang Qing culture, Republic of China culture, anti Japanese War Culture and industrial culture made the audience marvel. A performance showed the elements of Shenyang incisively and vividly, and unfolded an infinite beautiful picture for the cultural and tourism cooperation between Shenyang and Chengdu. At the promotion meeting, Shenyang's high-quality tourism resources were introduced, as well as the profound history and culture, and the deep integration of culture and tourism, making Shenyang, a city with both classical and modern charm, become a new tourist destination for Chengdu people.

Red walls and white tiles, through history, is a profound Qing culture; commander Zhang's mansion is connected with courtyards, which is a witness to the changing culture of the Republic of China; passion for ice and snow, leisure hot springs, which are the unique charm of winter ice and snow projects in northern China; red mark, family feelings, the first shot fired in Shenyang during the 14 years of Anti Japanese war is still in our ears; cultural venues, industrial changes, veteran workers The pride and pride of the industrial base encourage modern people to move forward. The four themes represented by Qing culture, ice and snow culture, Republic of China culture and industrial culture were staged in turn.

When models dressed in exquisite Qing Dynasty court costumes stepped onto the T-stage, the audience held up their mobile phones and took photos in succession for fear of missing any wonderful moment. "I didn't know Shenyang very well in the past. Today I can see such a beautiful scene in Chengdu. It seems that history is coming. My heart has already flown by. I must go to Shenyang within this year." Chen Ting, a Chengdu citizen who signed up to watch the promotion meeting, told reporters.

The performance, which also makes the audience reluctant to blink their eyes and put down their mobile phones, comes from a group of lovely and dynamic robots, full of industrial characteristics and scientific and technological strength. It is the embodiment of Shenyang's vigor and vitality, showing Shenyang's heavy industrial heritage and modern high-tech industrial charm.

According to the reporter's on-site interview, many local travel agencies are attracted by the charm of ice and snow in Shenyang, and plan to organize groups to experience the ice and snow projects this winter. Bai Xiao, manager of Sichuan Global News International Travel Agency, told reporters that he has always been interested in ice and snow products in the north, but due to the lack of temperature design related products, through this promotion meeting, we learned that the winter temperature in Shenyang is not as low as that in Harbin and Changchun, and the ice and snow tourism products are not often suitable for southerners. If the epidemic situation is allowed to prevent and control this winter, I will definitely organize a group to have a look Travel by ice and snow.

Ni Chenshan, chairman of Shenyang Youth International Travel Service Co., Ltd., said that under the special situation this year, the tourism market has been hit hard. This time, the government has led a team to "attract tourists into Shenyang" and expand the brand appeal of Shenyang tourism, which will inject new vitality into the tourism market of Shenyang and bring new business opportunities for travel agencies.

Zhou Wansheng, deputy director of the Publicity Department of the Chengdu municipal Party committee and Secretary of the Party group of the Chengdu Municipal Bureau of culture, radio, television and tourism, said that Chengdu and Shenyang have complementary resources and hope to promote the exchange of tourists and strengthen the prosperity and development of cultural tourism in the two places. The signing of the cultural tourism cooperation agreement between the two cities will create a new situation of tourism cooperation.

Promote the rapid recovery of cultural and tourism industry

Meng Fantao, deputy director of Shenyang Municipal Bureau of culture, tourism and radio and television, said that the Shenyang Promotion Delegation to Chengdu is full of sincerity for Chengdu tourists and has sent a "big gift bag" for tourists from Chengdu. Chengdu tourists can enjoy preferential policies when they come to Shenyang.

At the promotion meeting, Guan Ronghui, Secretary of the Party group and director of Shenyang Municipal Bureau of culture, tourism, radio and television, sent a warm invitation to the people of Chengdu: "we warmly welcome you to visit Shenyang and Xingye. We will welcome you with the warm and hospitable Northeast Folk Customs, interesting Shengjing folk customs, and attractive and delicious Liao cuisine! It will also let you experience the beauty, sincerity and friendliness of Shenyang in the strong influence of Qing culture, Republic of China culture, anti Japanese War Culture and industrial culture! "

Fang Mingzhen, former vice chairman of China Broadcasting and hosting Committee and former deputy director of Liaoning Provincial Committee of culture, culture and history, called himself "Shenyang Cultural Tourism volunteer". He introduced Shenyang Palace Museum and told the audience "things in the palace wall". In his introduction, many people had great interest in Shenyang Palace Museum.

Li Qiong, a staff member of Sichuan holiday travel agency, said that she had never been to Shenyang before. Through this promotion meeting, she had a new understanding of Shenyang. Among all the cultural tourism resources in Shenyang, she likes the Forbidden City best. When asked if she would go to Shenyang in the future, Li Qiong said enthusiastically, "I can't wait to leave now."

"We must form an ice and snow regiment this winter!"

"Although I haven't been to Shenyang, I have always been interested in the northern country, which is" frozen for thousands of miles and snowing for thousands of miles ". So when Shenyang came to promote the project, I came to the scene without hesitation. I hope to have in-depth exchanges with Shenyang industry colleagues and look for cooperation opportunities." There are not a few people in Chengdu who have the same idea as Lai Shuangrong, manager of Sichuan Youth Travel Agency.

Reporters in the field interview learned that many travel companies have a strong interest in the snow and snow project in Shenyang. In a while, Shenyang will enter winter. At that time, ice and snow tourism projects will be lively again. Shenyang Ice and snow enterprises have also prepared a series of preferential policies, and Chengdu tourists are welcome to visit.

The audience is holding "haohele" to taste it

Shenyang comes to Chengdu with full enthusiasm. Through the special products of Shengjing, Chengdu people can understand and approach Shenyang, and invite Chengdu people to visit Shenyang with good luck.

The lucky draw brought the promotion meeting to a climax. A total of 16 lucky guests were selected in the two rounds of lottery. Shenyang supply and Marketing Cooperative Association provided them with a gift bag of "Shengjing Haoer". There are more than ten kinds of cultural and creative products of Shenyang Museum, such as the old Lin sugar, Yimu hawthorn and Shenyang Museum.

A winning audience said: "thanks for the luck Shenyang has brought me, I can't wait to taste these specialties! In the future, I will definitely travel to Shenyang and have a good experience of Shenyang, a famous historical and cultural city. "

"A mansion is half of the history of the Republic of China." Zhang's mansion is known as the former residence of the first famous person in Northeast China. It has many buildings, connected courtyards, and green brick ridges and tiles. It will take you to listen to the legend... " Before the promotion by LV Xinmiao, the promoter of the museum, the splendid cheongsam show was staged, and fengtiancheng's ten thousand kinds of customs and foreign style and romance surprised Chengdu audiences.

When she learned that Shenyang, as the "ancient capital of cheongsam", had held several Qipao festivals in succession, Ms. Li was envious. "I have been completely attracted by the Qipao show just now. I hope to have a chance to visit Shenyang during the Qipao Festival and see the cheongsam award which is the leading vane of cheongsam fashion."